4 Disruptive Technologies With A Bright Future In Every Sector 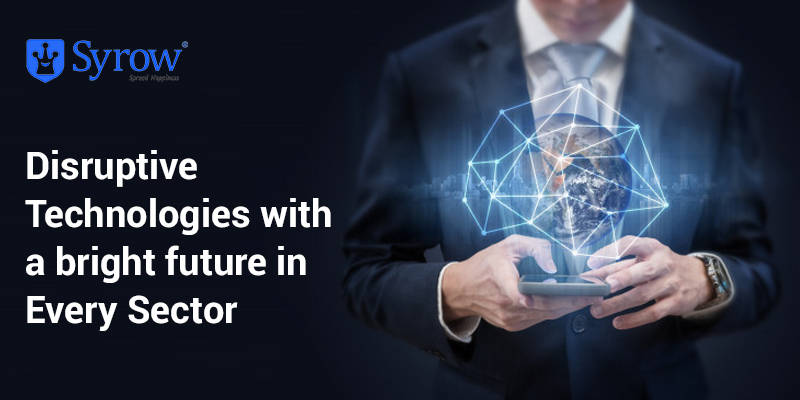 Technology plays an undeniable role in our lives. A disruptive technology, is one that breaks down old patterns and begins a completely new cycle of working, living or socializing.

Some top disruptive technologies that once merely fascinated us, are now a part of our everyday existence. They include:

We’ve identified 4 disruptive technologies from the above list to explore and understand what to expect from them in the near future.

AI is not new but its uses and applications keep evolving. This tech works based on a system that perceives the environment, learns about it, and solves problems with cognitive abilities. The more these abilities develops, the wider will be its applications.

What began as a means to master games such as checkers and chess, has today emerged as a vital component of online fraud detection, spam protection, e-commerce, customer support channels and the beginning of autonomous vehicles. The conversational commerce industry consisting of chatbots and advance analytics are also based on AI and are highly popular today and will continue to be.

You May Also LIke: Omni-Channel Customer Support Is The Future Of Client Servicing

As time goes by, we can hope to see AI enhancing every sector such as Healthcare, Hospitality and Communication.

The more basic version of AR is known as Virtual Reality and our gaming and entertainment industries have been using this technique for years. However, with development we are now seeing the entrance of Augmented Reality in areas of Tourism, Real Estate, Architecture, E-commerce. Sports, Alternative Healing and Education among many others.

VR and AR offer a glimpse into a paradigm that cannot be described in words. The visual input of a VR simulation works 100 times better than any audio visual advertisement, promotional film or standard movie.

With the world still maintaining social distancing, AR comes as a saving grace to offer all kinds of experiences from the safety and comfort of people’s own homes.

Though the area of Energy generation, storage or usage does not sound very technological advanced, there are numerous disruptive technologies and inventions that have taken this sector to the next levels.

With energy being a global concern, we can look forward to advanced ways of sustainable development fueled by ingenious ways to harness solar, geothermal and even ocean power. With traditional methods proving to be ineffective, the aim of renewable energy technology is to minimize resource usage, limit pollution and restrict climate change.

Players entering this sector at this point, hold immense potential especially in the areas of wind turbines and solar panels.

Robotics has earned its place in the present and future. Like most other disruptive technologies, it has a major role to play in our daily lives. We are already experiencing ways in which Robotics can increase efficiency, enhance safety and deliver outstanding results.

It combines AI and works within the IoT function by being the link between the physical and digital worlds. Manufacturing units the world over have been using robotics in their production lines.

With the entry of service robots, we see Robotics feature in industries such as Security, Healthcare and even Agriculture. Robotic surgical systems and prosthetics are another promising area for this technology.

As such technologies develop, we can expect a more digital and connected society. Industry is predicted to boost in productivity and efficiency levels. Each disruptive technology has its own place and role within a cutting edge environment that is fore-casted to only get better, faster and safer. Do you agree?

Related: A Brief Guide To Saas and Its Importance In Today’s Businesses

Get weekly updates on the latest technology, strategies & Customer Service trends to your inbox.